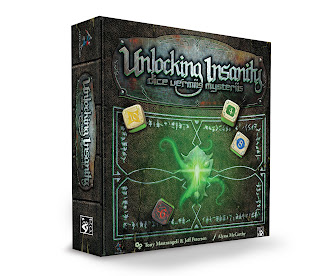 As the world trembles on the precipice between light and darkness, it is up to the faithful few to ready the world for its future overlord—Cthulhu. As they wait for that fateful moment, it is up to them to train the new devotees to the Cult of Cthulhu. But learning the teachings of the Great Old One is not without its risks. Many will fall into the abyss of insanity, but a precious few will prevail against madness and emerge stronger for their mastery of the old texts.

As a new recruit to the cult, you must carefully balance knowledge against insanity. Weighing your options to retain control over your faculties and come forth victorious!

A touch of madness never hurt anyone, after all . . .

Put the negative (darker color) dice in the bag and place next to the first Active Player—the one who joined the cult most recently. Every player will need a brain sheet and a pencil. The Active Player will also take possession of the positive (lighter color) dice. The Insanity Cards are sorted into their color categories, the “First to Insanity” card placed on top, and placed in the center of the play area. 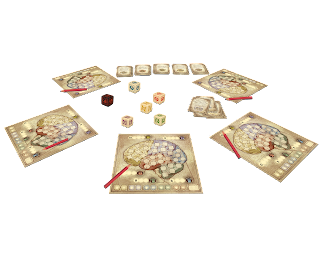 Unlocking Insanity is played in rounds, going clockwise. The active player is the one who holds the power of the dice.

STEP ONE: The active player checks his/her brain sheet to determine whether or not they’ve tipped over into the abyss of insanity. All that is required is for the negative numbers in one (or more) regions of the brain sheet to be larger than the positive numbers for the corresponding color.

You’ve gone insane? Congratulations! Make sure to take an insanity card that matches the color of your insanity. If you’re the first person to go insane in that particular color, then a double congratulations is in order. Be sure to collect the “First to Go Insane in (CoLoR)” card as well. Despite what people think, there can be some benefit from going mad—or, as we like to call it, strategically mislaying one’s marbles.

Still sane, are you? Well, nobody’s perfect, right? Time to roll the dice of fate . . .

STEP TWO: The player who is actively courting madness will now choose two of the positive diceand roll them.

*Take special note* You must be able to use at least one of the results from the dice.

STEP THREE: All playerswill then choose one of the results and record them in the appropriately colored region on the brain sheets.

*Special Note* But what if you have been diligently keeping yourself sane and there are no more spaces in the color of both results from the dice? Fear not, aspiring acolyte, you may either do nothing or place a 2 in any other available space. 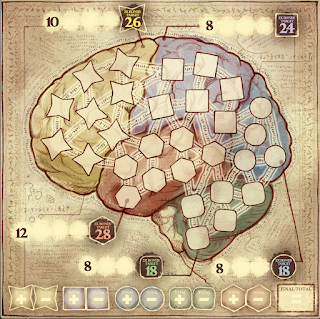 STEP FOUR: Now comes the true test of your rational mind. The active player must now choose a negative die from the our Little Bag of Insanity and roll. EVERY player must then record the result in two places: the region of the brain of the same color as the die, AND an adjacent brain space—which need not be the same color.

*Special Note* In the event you have managed your sanity with greater foresight than the average acolyte, and all the places for the negative die have already been filled in, you still have some options. Joining the faithful requires sacrifice, specifically by crossing out an empty positive space of the same color of the die. Hmm, all of your positive spaces are already filled up or crossed out? In this case, it is permissible to cross out a positive space on your brain sheet that’s adjacent to the color of the die.

What? Still here, and unable to cross out any positive spaces in any of the colors? You are truly dedicated to the cause, and the Greatest Old One of All will have mercy and allow you to go unscathed (i.e. do nothing).

In the event that you—or any player—can’t fill in the two negative results, be sure to still cross off at least one of the positive spaces.

STEP FIVE: Once the negative die has been cast and everyone accounted for, the die is set aside until there is only one die left in the bag. In which case, all the negative dice are returned to the bag.

It is now the next players turn. Gameplay is done clockwise—passing of the dice and starting a new round.

And now we come to what drew us all here in the first place: InSaNiTy!

The first thing the active player will do is check their brain sheet to ensure that no madness has crept upon them unawares. The positives of each of the brain’s region must be greater than the negatives.

Once this is no longer the case, and the negative numbers gain the upper hand over the positives, the player then goes insane *in that color.*

It is unadvisable to panic at this stage. Rather, the active player must procure an Insanity card that matches the color they went insane in. Being the first to go insane in each color comes with its own benefits. Namely the First to Insanity in [Color] bestows a bonus that may be used once per game—and it doesn’t even have to be your turn. It also grants the active player the ability to immediately roll a negative die of your choice. All the other players must then place the result on their brain sheets. If this is the case, congratulations. 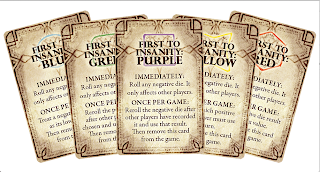 Also, be sure to pick up a regular Insanity card as well. Madness can’t always be rainbows and roses.

You’ve gone insane! Is there no remedy for madness?

We’ve got you covered here. If, at the start of your turn, dear active player, you discover that the positives in a previously insane region of your brain sheet is of greater value than the negatives, then a hearty congratulations is in order. Once this occurs, and the brain sheet confirms that your lid has no longer been flipped, you may return your insanity card to the pile and bask in the clear, cool strains of a rational, sensible brain.

As soon as a player fills in all their positive or negative spaces on their brain sheet, the game ends.

At this point, everyone should begin totaling their scores.

How This is Done:

Step One: Add up all the positives on your brain sheet from every region of the brain and record the total on the brain sheet.

Step Two: Do the same as step one, only with the negatives instead of the positives.

Step Three: Add the total positive score to the total negative score to see who has the highest score, as that is what it will take to win this game.

In the case of ties, being positive matters. The player (in the tie) who has the most positive spaces filled (note: spaces, not totals or numbers) will win the day. If this is not sufficient to break the tie, then the player with the highest total found in step one above wins. If you are *still* tied, then congratulations, even the Old One has lost interest by now and you may both share the burden being in first place.

I think the one that got us the most was remembering to do that little sanity check at the beginning of each turn. Other than that, the rules were fairly straightforward. It helped to keep the rulebook close.

The components were simple and well made. As someone who stresses over consuming game components—like the brain sheets—I’m veryhappy that the publisher has laminated brain sheets available, along with markers that come equipped with an eraser on the lid.

I really liked the art style of the brain sheets, the dice, and how simple all of the components were. Other than the exceptions—all of your negative spaces are filled in, etc.—the rules were simple and easy to learn. After a few rounds, the exception rules were a lot easier to remember.

The thing I really loved was howsimple it was to figure everything out, but playing successfully against the other acolytes is a different thing altogether. Quick to learn, but it’ll take time to master—which is a good thing in my book.

The only thing I would change about the game are the choice of blue and green colors on the brain sheet. The light we were playing by wasn’t dim, by any means, but less bright than, say, sunlight. It was sometimes easy to mistake the green for blue and vice versa.

Disclaimer: The publisher provided the review copy of Unlocking Insanity. They also kindly provided the laminated sheets and markers. The opinions expressed in the review are completely my own.