Around 12-18 months ago, it seemed as though Lucky Duck Games planned to make a whole catalogue of board game themed upon different mobile apps, with releases like Jetpack Joyride and Fruit Ninja. They’ve diversified a lot since then, but Kingdom Rush: Rift in Time is another game based upon an app that just fulfilled from Kickstarter.

We’re not really mobile gamers, and have never tried the Kingdom Rush app, but having tried out the prototype of Kingdom Rush: Rift in Time, we got a taste for this unique cooperative, tower defence game. You and your allies are fending off the onslaught of the time mage. You’ll build castles and use mages, archers and other troops to attack the incoming troops.

Kingdom Rush is a tower defence game, and as such you’ll be placing down towers to do damage to enemies who are trying to destroy your castle. It’s also a coop game, each player takes control of one hero which has their own powers to help defend the realm, depending on the player count a number of transparent markers will be placed over the map to indicate who can use which tower build location.

Each round will consist of a phase where players can play towers and use their heroes, followed by an assessment of destroyed enemy units. All surviving enemy units will then move (unless delayed by some ability, typically troops) one space towards the castle, potentially jumping over each other as each space can only hold one enemy. Finally each spawn points will spawn one new enemy. Kill enough enemies and you’ll uncover powerful portal enemies, defeat all of these and you’ll win the game (though the campaign includes other win conditions for some missions).

The core of the gameplay comes down to Kingdom Rush‘s unique way of attacking enemies. All of your towers and heroes place damage tiles in the form of tetris-style blocks. Enemies are themselves each a 5×5 grid on which only some spaces represent enemies. Once all the enemy places are covered by damage tiles then the enemy is defeated. But should you only maim an enemy fear not, they only deal one damage to your castle for each pictured enemy, leaving only one goblin alive is far preferable to having a horde invade after all. This then makes the game one of positioning and timing. Towers can only hit enemies within a certain range of where they are built and often the damage tile can’t be rotated so you have to use the right tower at the right time from the right place. Since each player only owns a limited amount of build spots you’ll have to ensure the right player has the tower they need when they need it.

This is where the next main component comes in. Towers can be upgraded. Instead of playing a tower on your turn you can instead upgrade it to the next level and give it to the next player. Upgrading towers makes you permanently more powerful as a team, and allows you to change who owns the tower. You can also use gems earn from killing enemies to buy new towers. You can’t just coast along with low level towers as most portal tiles can only be hit by towers of higher levels, even worse they destroy the tower in response! This is one of a plethora of special abilities found in the game, some enemies are faster, heal, ignore certain damage types etc. Fortunately these powers can be turned off by covering up all of the special troops on the monster board that give those abilities!

Kingdom Rush: Rift in Time may be inspired by an old video game, but it brings a lot of new gameplay to the field. I’ve played a number of tower defence board games and they have almost all involved enemies having fixed health pools that you slowly drag down to zero. This may be faithful to the video-games, but it doesn’t translate well to the analogue medium. Kingdom Rush’s switch to a tetromino style damage tiles allows for each tower to feel significantly different with unique shapes and gives that tactile gameplay that makes board games so special. It also lends naturally to the tower upgrade mechanic as the damage tiles get bigger and/or more flexible.

However, it does also lend itself to an awful lot of components. While this does make the game look and play great, the setup of enemy boards and placement of tiles does take just that little bit longer as you fish for the right shape among all the mage tower tokens. This is compounded by the set up time, where you have to find the right map tiles for your mission, place out the build sites in the right order and go through the monster deck to find the correct combination of tiles. to create each of the spawn point’s decks. These monster tiles all have to be in the correct order too. None of this is particularly egregious, but it does make the game feel a touch clunky at times. 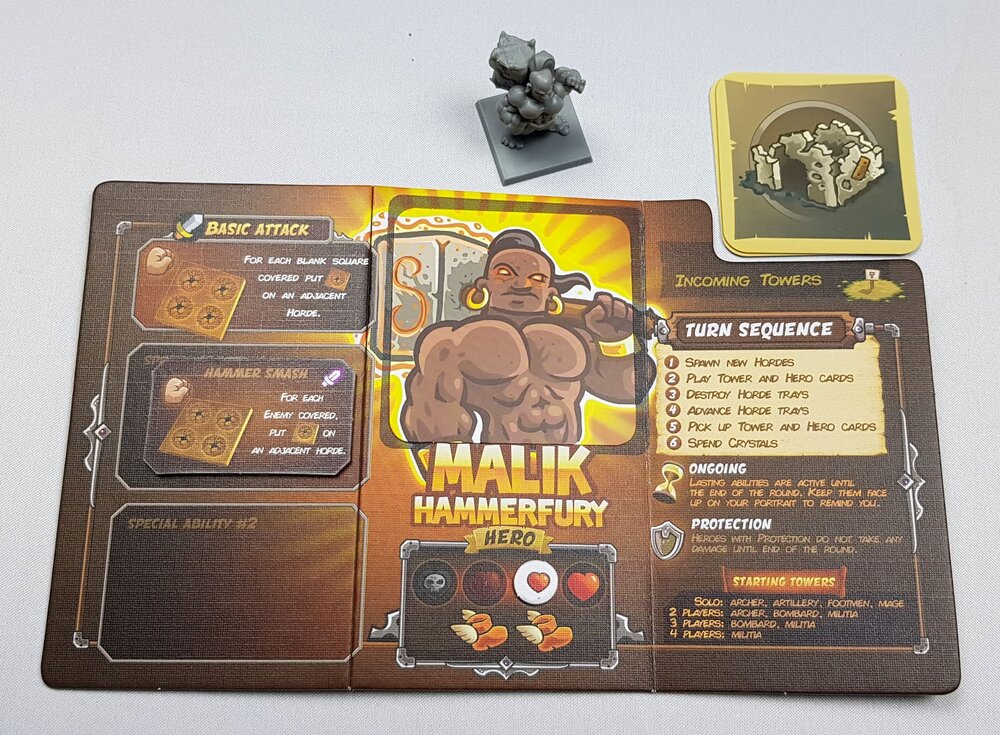 But that “clunk” is well worth it, for in this oversized box is a good chunk of gameplay, with a full campaign including variable difficulty levels as well as extra hard challenge modes unique for each map’s challenges. The game even includes stickers and a game map so you can track your achievements just like in the app.

Overall Kingdom Rush: Rift in Time does a fantastic job of translating a video game to a board game, keeping enough of the source material to stay authentic, while taking liberties where needed to make a fantastic gameplay experience. It also remains a light theme which doesn’t interfere with the game should you not know the app. Frankly it’s a fantastic way to bring tetromino tile laying into a cooperative game. There’s heaps of content and even different heroes to play with multiple load-outs making this great for replayability. In conclusion, when you see this in a store; pick it up. Buy it. Play it. Love it.

We love to play cooperative games, no matter how they work, but some of our favourites are those that really rely on communication and planning to make the most of what everyone at the table has to offer. Kingdom Rush: Rift in Time really makes you think about the best way that each player can contribute to hold back the onslaught. For us, each turn starts with identifying the ‘must defeat’ tiles and then looking at how each of us can make attacks that complement each other and are the most collectively effective. There’s a couple of ways in which Kingdom Rush goes the extra mile to make sure that cooperation is key. The first is by giving each player certain spaces on the board that only they can occupy – some players will have a better shot at certain enemies. The second is the upgrade mechanism – if one player chooses to pass some troops to another player and get them upgraded, they’ll soon run out of troops unless someone else at the table passes them some cards back.

Kingdom Rush is also a campaign driven game, meaning that each scenario is different from the last and that there is some progression in terms of difficulty and complexity. I really appreciate how different each game feels, with different enemies, different map layouts and new ways to play the game, such as a pure tower defence or an escort mission. We didn’t particularly feel a need to play it as a campaign, but have chosen to play a different scenario each time we have played.

Kingdom Rush is a really well crafted cooperative game, both in terms of it’s great components and it’s very interactive gameplay. It’s not a complex game, but it is perhaps more complex than you would expect from a game based on a popular mobile app. It’s not necessarily that perfect gateway game for someone who plays the app, unless you have a friend who you want to personally introduce to the concept – for that scenario, the cooperative nature of the game will make it perfect for you to guide them through it.

Kingdom Rush is a fantastic implementation of tower defence as a board game. The scenarios are filled with so much variety, which makes each time you play feel unique. If you’re looking for a cooperative experience that stands out from the crowd and makes you really need to pool your brain power, then Kingdom Rush is a massive treat. However, if you have someone in your life who loves to play the app, so consider if this game might be a slightly complex entry point into hobby board games.

Kingdom Rush: Rift in Time was a review copy kindly provided to us by Lucky Duck Games.

Originally posted at Punch Board Media