Ever came across the term ‘Dry Drowning’ or ‘Secondary Drowning’? Well, I was blissfully ignorant till the time my child started jumping in the splash pool. Like any other child, he is too fond of splash pools and so when the summer arrived we bought him one. The child safety instructions were pretty simple and straight. But being me (I always like to dig things a bit deeper) I started researching for everything around pool safety and that’s when I bumped into this term of Dry and Secondary Drowning.

These two scary terms refer to drowning outside the pool. Now, you would think how is that possible? Well! I thought the same and was rather taken aback at the idea. I mean I thought drowning occurs only in water. But that is not the case here and that’s exactly why it is scary. You do not suspect it and more than often are unaware if such scenario actually exists.

Dry and Secondary drowning both occur outside the water. Though many people use the terms interchangeably, there is difference between the two. Dry drowning refers to spasm in air pipe due to swallowing a few sips of water. This leads to difficulty in breathing and be fatal if ignored. In Secondary drowning water enters the lungs causing them to swell and thus leading to breathing issues. Both these scenarios occur after the child has long left the pool and is characterized fever or fatigue. Thus making it extremely difficult for care givers to connect the dots. A few observations can go a long way in differentiating Dry and Secondary drowning from normal fever/fatigue symptoms.

1. Monitor and Observe: It occurs 24-48 hours after the child swallowed a few sips of water while swimming. So it is extremely important to monitor your child post her swimming fun.

2. Breathing Trouble: If a child has trouble breathing after his swimming class, seek attention immediately and ask for a chest X-Ray. Or if you find your child taking shallow, fast breaths or feel that she is trying harder to breather properly take her to the doctor immediately and share your concern.

3. Fever and Fatigue: If your child unusually tired after swimming or develops fever and is extremely sleepy, you should be alarmed. Do not waste time and rush to a doctor immediately.

4. Coughing and Vomiting: Both these indicate a general level of stress in the body. While coughing will lead to increased load in breathing, vomiting will increase the uneasiness and chest pain.

Since most of these symptoms are extremely common, parents need to pay extra attention if the symptoms have developed post swimming and need to differentiate them from common fever and fatigue. It is best to be proactive and monitor your child. While both these forms to drowning are extremely rare, but they still cannot be ruled out. The best precaution parents can take is to be attentive around their children when they are in the pool. Under no circumstances should a child be left alone in the pool by him/herself. These small precautions and attention post swimming can make a big difference. 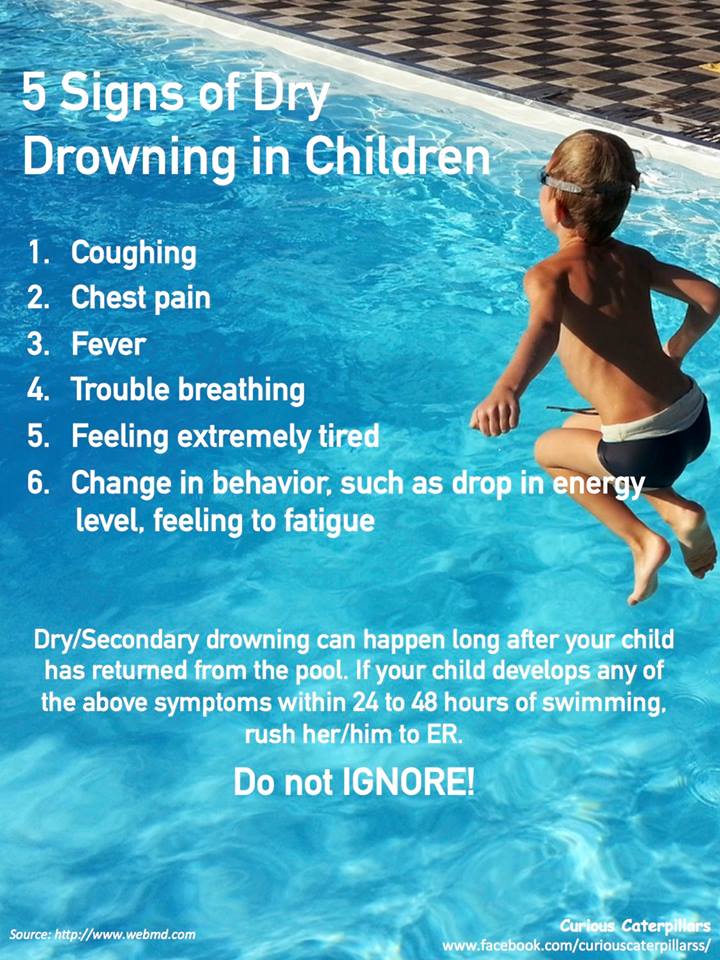 The post Secondary & Dry Drowning – What Every Parent Must Know! appeared first on KidPillar.