Quick Look: Maeshowe: an Orkney Saga
Designer:  Lee G. Broderick
Artists: Matthias Catrein & Lars Munck
Publisher: Dragon Dawn Productions
Year Published: 2021
No. of Players: 1-2
Ages: 12+
Playing Time: 15-30minutes
Find more info on BoardGameGeek.com
From the Publisher:
According to the Orkneyinga Saga, Earl Rognvald Kali Kolsson broke into the chambered tomb of Maeshowe, on Orkney, in AD1150. In AD1153, Earl Harald Maddadson and a group of his men sheltered there during a snowstorm. The sagas tell us that Rognvald found treasure there and that two of Harald’s men went mad.
Alone or with a friend, players will on their turn need to play one card to the row and discard one. Managing their hand of five cards players need to make tough calls on what to play while carefully managing their resources of health, food and cards left in their draw deck.
The players will free themselves from the Tomb of Maeshowe once they’ve removed enough rubble blocking their escape. By playing a set of four “Excavation” cards to the row, the players are able to remove rubble. The timing of when to start a set of “Excavation” cards will be critical since a row of less than four will result in those cards being lost decreasing player chance for survival.
If the player ever find themselves having 0 health or run out of cards in their draw deck, they have lost and their dead bodies will be found in the Tomb of Maeshowe by Archeologists hundreds of years later.
Other threats presented by their draw deck includes such things as the passage collapsing and running out of food while some well needed sleep or Odin himself sending a Raven to watch over you, can provide you with some much needed relief.
This updated version of Lee Broderick’s Print and Play game Maeshowe, offers a streamlined version of the core gameplay while adding a series of mini-expansions and alternate set-ups for more variety, challenge and replay-ability. 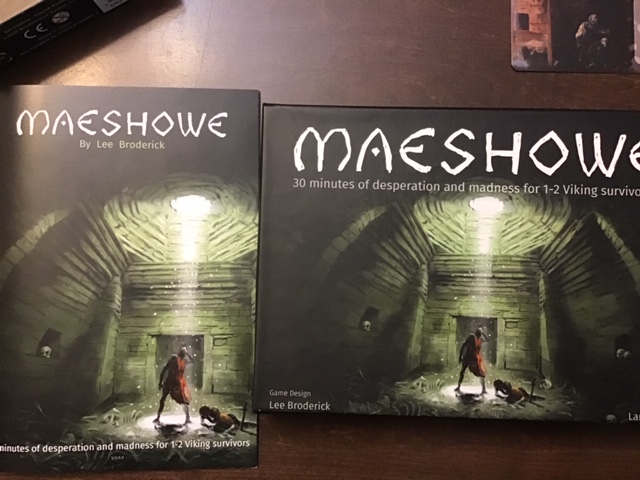 Note: Images shown here and below/above are that of a prototype and may change at the time of publishing
Review:
I just wanted to put in a quick word for Maeshowe since it is only going to be on Kickstarter for a few more days (Less than 66 hours, ends on Thu, February 4 2021 1:20 PM PST) at the time of this review.
In a nutshell, this game tells a story of how two noted (and historical) Vikings of note become trapped in the Maeshowe in the 12th century. The game uses card playing to create an atmosphere where time is of the essence ; while treasure may have been what led one of these historical figures into this famed structure, such trinkets as you may acquire become meaningless after all, if you cannot manage to somehow get out of this death trap with the most valued treasure of all—your life!
It is also designed for 1-2 players, to be played in about half an hour.
I would ordinarily like to provide a much more thorough analysis , but given the time constraints of having just now received the prototype for Maeshowe, I wanted to provide some feedback as to my experience this far, as it is a good game, and deserves some extra attention in its final few days in the KS spotlight. 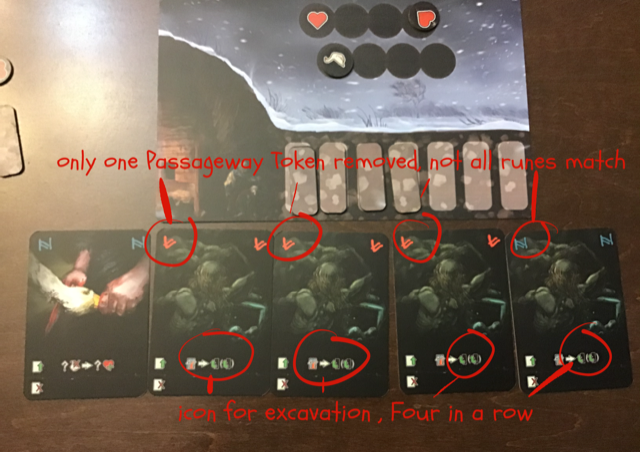 Note: Images shown here and below/above are that of a prototype and may change at the time of publishing
Before providing a summary of my impressions , I would also add that the Maeshowe Kickstarter page (and included instructions) does a more than sufficient job of explaining the rules—they are literally that easy to grasp. But to synopsize , your main objective will be finding a way to dig yourself out of this tomb through somehow managing to remove a fixed number of Passageway tokens (depending on the difficulty level you select) from your playing field—if you remove all of these obstructions you win and escape. If you take too much damage, or run out of cards from your draw deck, you lose.
On each turn , you will have 5 cards to choose from to play. One needs to be played in a sequential row in front of you , while the other is discarded. Both playing a card and discarding a card triggers a consequence that may either help or hinder your efforts to escape.
You remove the Passageway tokens by playing Excavation cards. If you can somehow manage to get four of these cards in a row placed over a matter of turns, you get to remove one Passageway token.  An added twist is that you can try to match the rune types on all four of the cards—if you are fortunate enough to be able to do this, you can remove two Passageway tokens instead of the usual one.
Each card also has a color — if you are unlucky enough to have 5 of the same color in your hand at one time, you are essentially going mad, lose health and must reshuffle all the discarded cards back into the main draw deck. 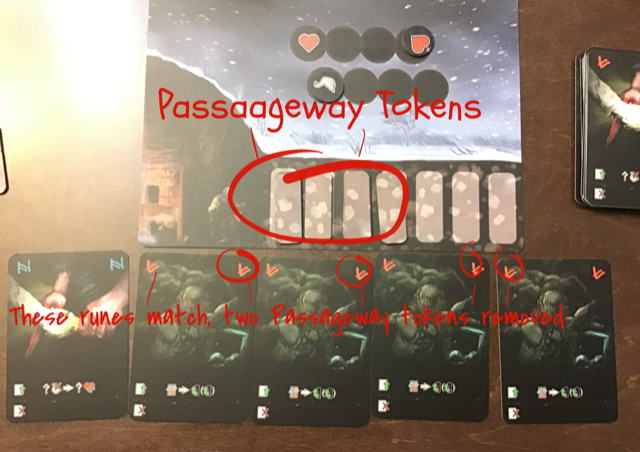 Note: Images shown here and above are that of a prototype and may change at the time of publishing
So that is the short of it.
Now for my impressions, which are mostly positive.
—Maeshowe is very quick to learn, but do not think you are going to win immediately because of this! I ended up losing my first few games!
—Extremely easy setup!
—It is also easy enough to learn if you have room full of kids running around all over the place , distracting you every second. Good news for parents needing a breather!
—The game makers claimed to have a game that can be played in 30 minutes. They have surprisingly managed to achieve this, but realistically speaking , you could probably finish a game in about 15.
—A perfect match for people in a hurry, great for starting your day with a cup of coffee or a break.
—Small form factor and easy to carry around
—This is just a prototype , but if the finished product turns out as good, it is very well made. Card stock is great and will stand many years of shuffling without wear.
—Art is good and fitting. There is not a whole lot of it, but that is probably to be expected given how small the box is, and the fact that there are only about 45 cards, some of which repeat.
—Despite being a “simple” game to learn, it did make my brain tingle trying to puzzle out a solution.
—Comes with several “Expansions”. To clarify, these are pretty much just variant modes, but they do add to the challenge once you feel you have mastered the basic concepts of the game.
—Two Player Variant mode
Negatives / Things that could use improvement :
There were a few grey areas that could have used some clarification in the printed manual I received, but when I checked out the Kickstarter manual, my concerns were seemingly addressed, and any confusion I had may have since been resolved if they are printing off of the file I saw in the Kickstarter.
The card iconography is just pictures without text and is not intuitive at a glance, but thankfully this is easily referenced and remedied with big pictures of what each card does in the instruction manual.
Breakdown of my initial impressions after a few play throughs. This is definitely something I will want to play when I need a quick break from the ordinary chaos in my life!
Story / Art / Theme : 7.5
Gameplay : 8
Components : 8.5
Fun : 8.5
Overall :  8/10
Disclaimer: The publisher provided the prototype copy of Maeshowe: an Orkney Saga. The opinions expressed in the review are completely my own.
Back Maeshowe: an Orkney Saga on Kickstarter NOW!
Check out Maeshowe: an Orkney Saga and Dragon Dawn Productions on:

Jazz Paladin is an eccentric at heart — When he is not learning to make exotic new foods at home, such as Queso Fresco cheese and Oaxacan molé, he is busy collecting vintage saxophones, harps, and other music-related paraphernalia. An avid music enthusiast, when he is not pining over the latest board games that are yet-to-be-released, his is probably hard at work making jazzy renditions of classic/retro video game music tunes as Jazz Paladin on Spotify and other digital music services.
See Jazz Paladin’s reviews HERE.
Post Views: 16