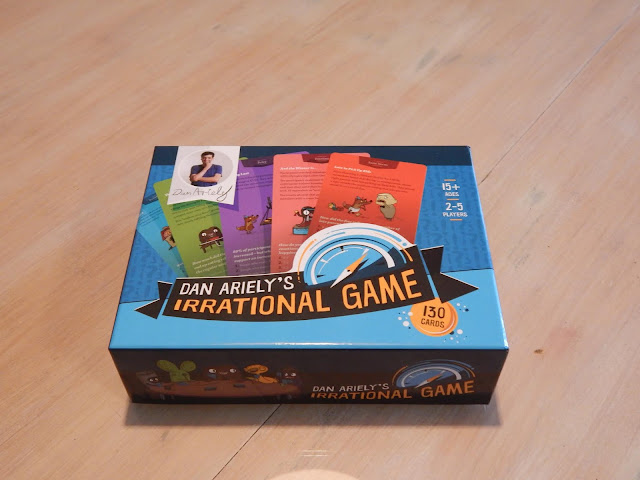 A thought-provoking, fun, and engaging game, where players second-guess human nature by predicting decisions people will make in unique situations.

Dan Ariely’s Irrational Game – The Best Trivia Game there is –

Let’s start with a Disclaimer : For the rest of the review I’ll just drop the « Dan

Ariely’s » while talking about the game. And it will be the « Irrational Game ». Why ?

and the way we behave in society. It’s centered around cards that depict a situation

and ask the players to guess the right solution. Every card also comes with little take 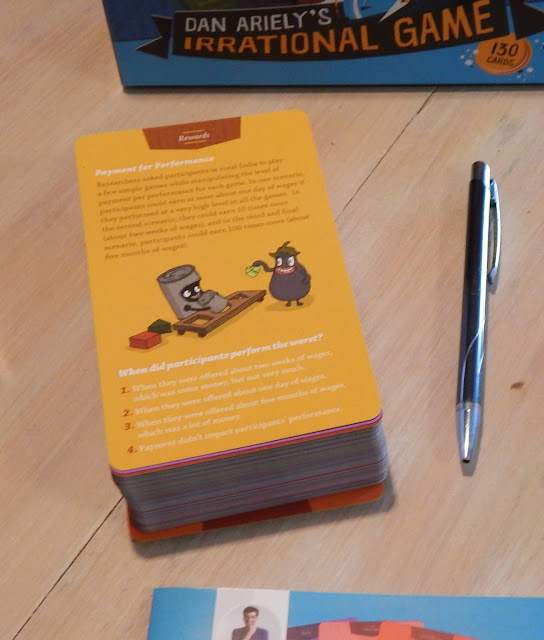 The game as such

questions and mechanics you’d find in a « Happy Families » or « 7 families » game.

The game is composed of two sets of large cards, one with the 130 questions that

Each question card has a 1 of the 5 psy-themes (Environment, Policy, Emotions,

Social Norms or Self-Control) attached to it. The Winner is the first player to collect 5

correct answers to Questions Cards( One from each Category), or 10 cards from any

correctly after reading the situation. If the players picks the correct answer from the 4

written on the card, the card is his to take and its first step towards victory.

guess on the same subject to obtain a power card, others let the player draw a power

The power cards allow the player to do a variety of things, from taking another players

card to skipping a question card, …

I already mentioned the Happy Families game, Well to me Trivia game have only one strategy,

being « answer the question correctly and you win ». Nevertheless let’s talk about the theme.

The theme of a board game is detrimental to be appealing to the gamer. This more true for

world than to know when SteamBoat Willy aired for the first time or the birthdate of JFK.

In fact when checking the answer, it is not only revealed but also contextualized by a short text,

explaining the discovery of the study thus making it even more interesting.

and you want to learn more.

There are 3 versions of the game, 1 contains a little less cards and one has improved

box art, but the contents of the box its self, the material used and the size of the cards

is the same in all three of the boxes. Picture displayed are of the Box with improved 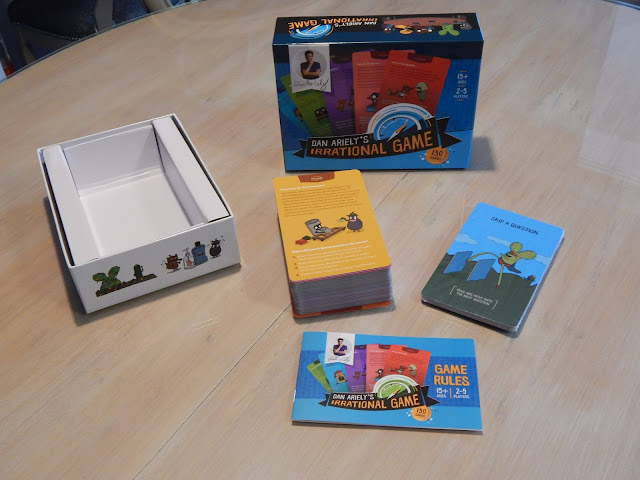 Let me emphasize again, those are BIG cards, and it does matter, in a Trivia game the size of

Not only are the cards BIG but they are also made of good card stock, which is detrimental when

you have to manipulate big cards, you don’t want them to be torn or folded. And 130 is a fairly

The rule book as such is really simple, easy to understand and quite anecdotical.

Each card comes with text and a small funny illustration. The art style chosen by the designer is

something that helps in grasping psychology and psychologically makes it more accessible.

Good and amusing choice it is !

The game offers one major downsize, due to its theme, and even though its a Trivia/party game,

game enthusiasts might like. It’s more a game for the people who want to remake the world

around a glass of wine than a game for those who want to laugh with a good beer.

The game’s biggest advantage is what one might able to learn from it. I know it’s not the only

manner to learn (strategy allows also to learn anticipation, probability and so on) but straight on

learning with small text and questions is also a really good aspect. People that are not inclined

Another minor advantage of the game is that the language level is really accessible. Being a

native French speaker, most of my friends barely speak english. I tried improving the english of

my flatmate by reading him one question a day, discussing what he understood and why the

seemingly putting effort to it. 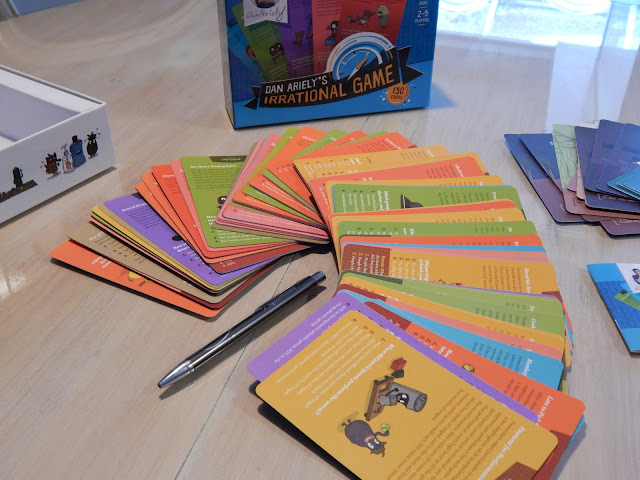 The Irrational game is the Best Trivia Game I played and certainly the most interesting one!

Allows to learn more about ourselves and our society. Although it’s the quietest party game I

played too and as for most trivia games, you won’t find the depth expert player are looking for.

Material : 8/10, No regrets, big cards is a go to when there is that amount of text to be

displayed! The simplicity of the Art-style helps demystify psychology.

Strategy : -/10, Is their any strategy in Happy Families ? I’m not certain this category applies

Theme : 7/10, The choice of the theme is interesting and makes most of the games interesting

as well. Although from time to time it seems to obvious to be a good choice of question.

yourselves and the way mankind apprehends society without putting much effort in it.

Conclusion: Get it used now! Given the amount of research needed and the attention

put in the game I would get it to play at family reunions, I would get the Normal edition

though, but if you are willing to pay full price i’d consider buying the Limited edition, as

the bow art is much sweeter to the eyes.

Disclaimer: The publisher provided the Limited Edition copy of Irrational Game. The opinions expressed in the review are completely my own. 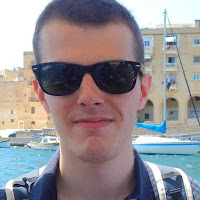 QuelqunQui (literally Someone who in French) is an eclectic who can’t stop doing more than one thing at a time..  Quelqunqui is a harpsichordist and gamer at heart that doesn’t abide by rules he doesn’t believe in.  When not playing he’s traveling the world for the Belgian Air force.