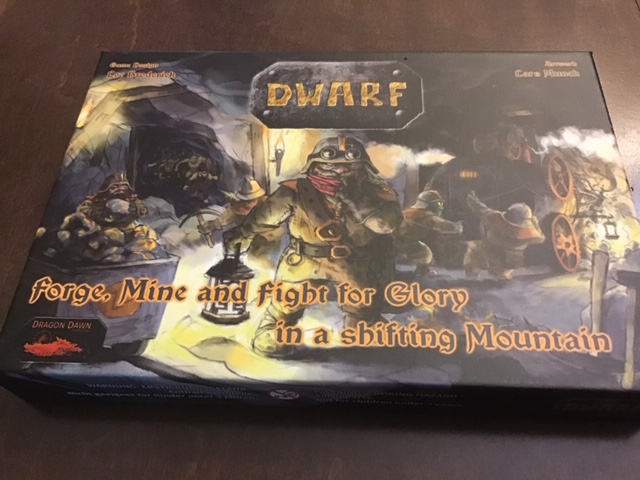 No. of Players: 1-5
Ages: 10+
Playing Time: 15-20 minutes.
Find more info on BoardGameGeek.com
From the Publisher:
Played on a dynamic board and featuring emergent cooperative elements, Dwarf is a competitive worker-placement and resource management game for one to three players, or one to five by integrating two copies. Played on a ‘board’ made up of a grid of cards which changes every round, ensuring that every game is unique, players take turns to place their workers, with the aim of accumulating the most wealth and forging the most legendary items, whilst protecting them from monster attacks.

They say that big things come in small packages, and it seems that this is an axiom that Lee Broderick has decided to adapt and apply to his craft and trade.

Brought to you by the same person who recently enjoyed a successful Kickstarter launch for Maeshowe (which I recently reviewed), Dwarf is a game that comes in a box that lives up to its diminutive namesake quite well — it is quite small — but it aims to deliver a full-fledged worker placement experience on a scale that feels much larger than its size would suggest it is capable of. Does this game stand out, or does it fall short like a stocky-legged subterranean-dwelling midget? Let’s take a dig and find out!

The premise of Dwarf is quite simple, though it thematically lends itself to the game quite well. The accumulation of resources has always been the central measure of success in dwarven society, and those who would unearth the most precious metals while mining deep within the bowels of the earth would always have a place of superior standing among dwarf kind. Your goal in this game is to acquire the most of a variety of treasures that are available as an excavation expert. 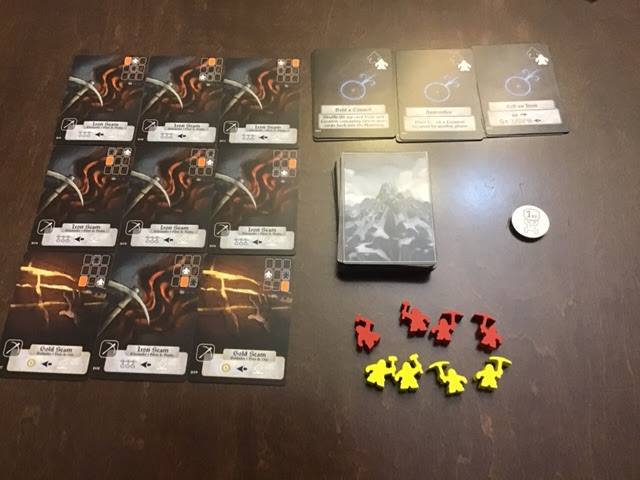 The game starts by setting up your playing space in a central mining area, a 3×3 grid that always starts in an identical formation of 9 cards.

A Mountain deck is placed faced-down to the side another pile of Special Action cards are placed into three even piles next to your 3×3 Mountain grid.

1-3 players (up to 5 can play if you have a second copy of Dwarf) will then chose a color of Meeple (2 Meeples are taken per player, with another 2 of the same color placed to the side to be used as “extra workers” under special circumstances) to use and determine who goes first, which will be designated by a 1st Player token.

In your game box, your resources gained in the game will be represented by wooden cubes and shapes, as follows: 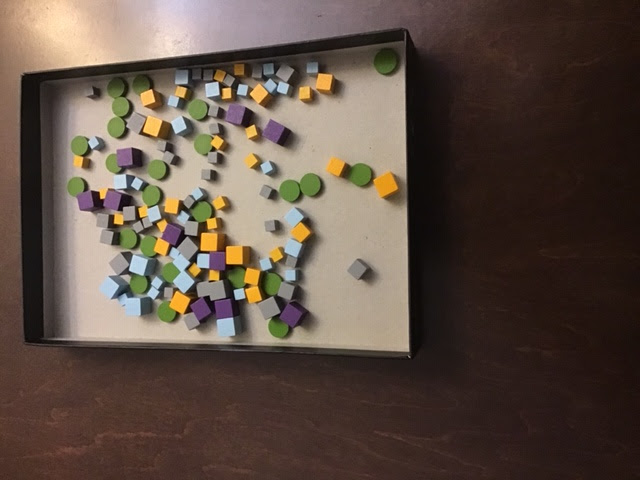 Iron—Grey Cubes (in small, medium and large sizes, to designate 1, 5, and 10 values) 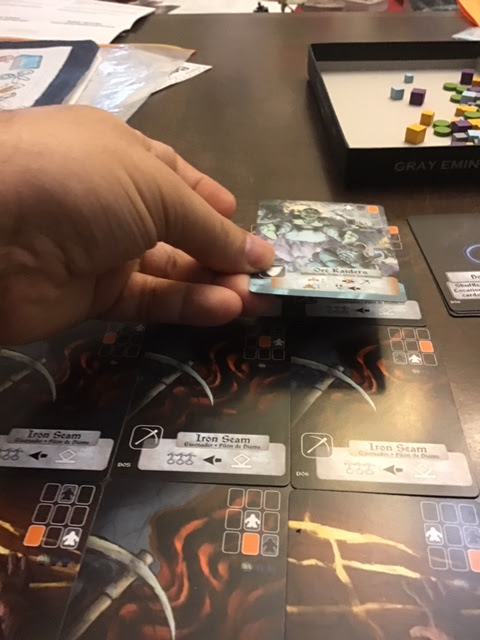 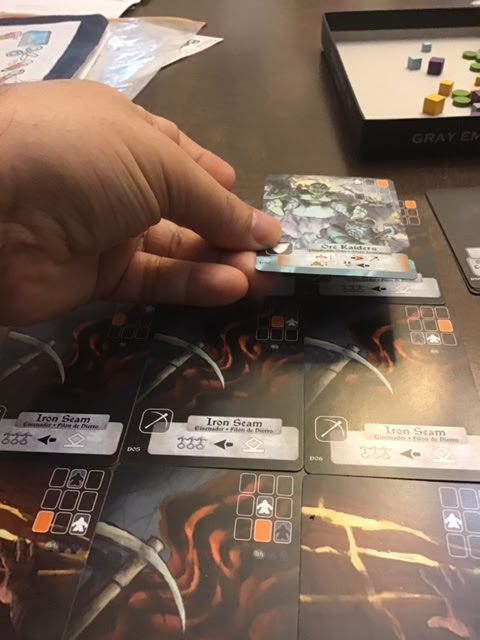 At the commence of each round, 2 cards from the Mountain deck are drawn, which have a clear visual denotation that shows where in the 3×3 Mountain area each card is placed, which means the array of cards in the playing space are constantly changing from round to round. In addition, each card also determines what will transpire after all players have placed their workers. 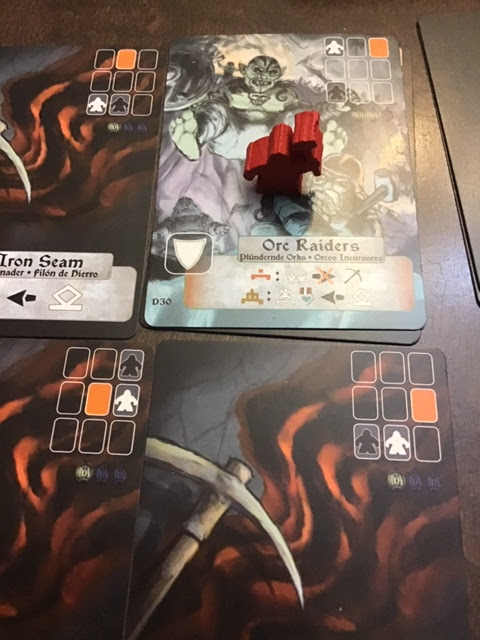 Next, each player will (in turn order) place one of their two workers on a Mountain Mining area in the central 3×3 grid, and then in reverse player order, each player can place their second worker onto a grid space if one is still available—you may not place a worker on a space that is already occupied. 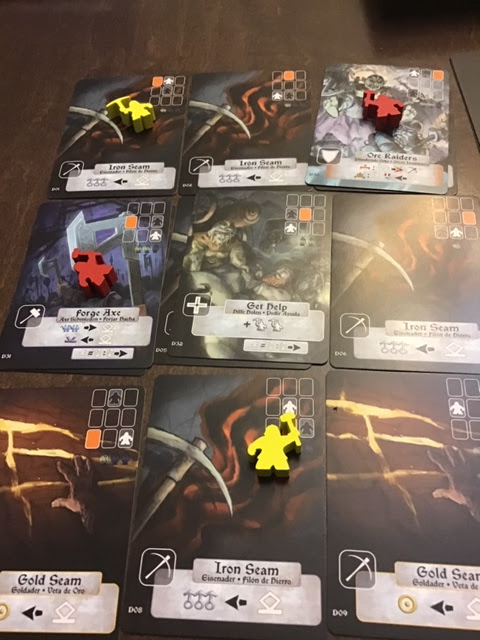 Alternatively, during their turn, a player may also opt to use two of their workers (or one worker along with 4 acquired Medals of Honor) to immediately activate a Special Action card on the side of the mine.  These usually have added effects that alter the layout of the mine, enabling you to mess with your opponent’s plans, but this can also have effects that are beneficial to everyone, such as placing already used mine cards from the Mountain play area back into the Mountain deck to be shuffled. (Because if you ever run out of Mountain cards, the game is over, and final scores are tallied).

Next, players will resolve cards on the Mountain Mine area—wherever there is a Meeple/Worker, an effect is generated. Hence, many of these cards will let you mine for iron or gold. Others will allow you refine steel from iron, or even craft valuable dwarven items (a single player crafting 4 items also triggers the end of the game).

However, not all glitters within the Mountain—occasionally, monster cards will creep into the play area of the map, meaning that players will need to defend their play space by placing a worker there, which allows them to avoid devastating consequences for all players, but  potentially means also forgoing any chances of mining for precious resources during their turns.

Once a player has crafted 4 items or the Mountain Deck has been depleted, the end-game triggers, and players finish up the round and tally up their scores.

The winner of the game is the dwarf who accumulated a majority in 2 out of 3 prime mining categories : 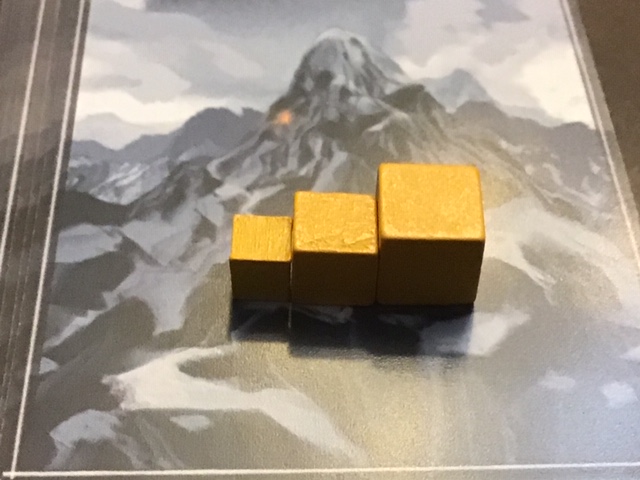 So even if one player has 25 gold, but not other resources, another player who had 5 Steel and 5 Iron would win even though they had less total resources since they won 2 out of the 3 categories.

In the event of a tie for one resource, the winner is decreed first in favor of the miner who had the most medals, and then if a tie remains, whoever had the most items crafted. 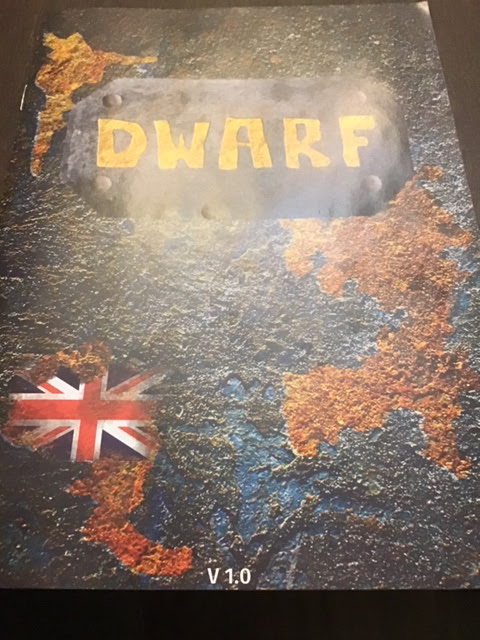 In a gaming world that has no shortage of worker placement games, Dwarf certainly has big shoes to fill. However, being that this is the second game I have played from Broderick (with Maeshowe being my first, see the review here), I can see a clear pattern that the game designed is trying to carve a niche into a very specific area of gaming territory, and it seems to be working ; both Maeshowe and Dwarf may not be the “deepest” in terms of gameplay, but once you play them, you realize that they do not have to achieve this status simply because they are not trying to be the “best” of a given category. Rather, they are trying to satisfy a need and dilemma that gamers face while on the go, namely not having anything that is easy to take along with you that can wet their appetite for a certain craving. If you have ever felt the urge to play a certain type of game but lacked both time and space, you can certainly identify with this issue at hand.

Thankfully, both Maeshowe and Dwarf deliver in this regard— you can easily take the games just about anywhere. And one thing that is nice about Dwarf that I am very hard pressed to think of another worker placement game that you can set up in a small coffee shop table—it really does live up to its namesake in being small enough to bring and play just about anywhere.

The component quality is overall very good, with the card stock being very sturdy and reminiscent of Maeshowe’s, which I had good things to speak of—the art itself is categorically similar, being from the same artist, and lends itself to the them just as well.

I will admit that worker placement games generally not my thing, and I will not mark the game down based on my personal preference, but rather I will judge it against others that I have played, and in this regard it certainly evokes all of the feelings I have when involved in similar sorts of games. If you like this genre in particular, you should find that it satisfies your itch.

As for the negatives, well…Ordinarily, I would never mark a game down for wooden components and meeples, as having dealt with manufacturing in the past, I know how expensive upgrade can be—the only exception to this would be is if there is some sort of quality or functionality issue, and in this case my wife and I had some trouble distinguishing between the small and medium sized cubes, and the medium and large sized cubes when put to task. At a glance, it could be harder to tell the difference than the picture here may suggest, but it was a real struggle sometimes. Once you put a cube into your hand, you could feel the size difference, but it did present its challenge if forced to rely just on your eyes at times. So perhaps in the future versions, something to add further distinction would be nice.

And as much as I value being able to take Dwarf anywhere, I think the smallest of these cubes really pose a danger of being lost forever into the dark crevices of a vent or under-shelf, never to be seen again if one is not careful.

One other thing that could perhaps be of benefit for future incarnations is having a small cardboard play mat to designate the initial Mine setup so one doesn’t have to look for cards 1-9 all the time.

Other than that…all is grand!

Make sure to check out their latest expansion now on Kickstarter!

Check out Dwarf and Dawn Productions on:

Jazz Paladin is an eccentric at heart — When he is not learning to make exotic new foods at home, such as Queso Fresco cheese and Oaxacan molé, he is busy collecting vintage saxophones, harps, and other music-related paraphernalia. An avid music enthusiast, when he is not pining over the latest board games that are yet-to-be-released, his is probably hard at work making jazzy renditions of classic/retro video game music tunes as Jazz Paladin on Spotify and other digital music services.
See Jazz Paladin’s reviews HERE.
Post Views: 23