I’ve been holding on to everything

With arms above, I’m balancing

— Matt Nathanson, “Back Together”

The recent review copy that landed in my mail slot from Stonemaier Games came with the most trepidation of any game I have received in recent memory. I knew nothing about the book series by Pierce Brown called “Red Rising” before Jamey Stegmaier announced he would be publishing the game. But even more important to me was the fact that I had played Fantasy Realms once in the past, and in all honesty, was not that big a fan of the mechanism of trading cards from your hand to upgrade to better combos. Would the inclusion turn me off in Red Rising?

It’s an interesting quandary. Walk with me now on a journey through a game that gets a lot of attention on social media — not all of it deserved.

Red Rising is a 2021 game designed by Alexander Schmidt and Jamey Stegmaier, and published by Stonemaier Games. The game features art by Jacqui Davis, Miles Bensky, and Justin Wong. It plays from one to six players in about an hour, although our game times have ranged wildly from thirty minutes to over an hour, depending on how the cards came out.

Caveat: we have not played the solo game…we’ll let you discover that on your own. Second caveat: I began reading the series after receiving the copy of the game, and just finished book two recently. (Mini review: meh on book one, really enjoyed book two).

For the rest of the review, including beautiful pictures of the components, click here. 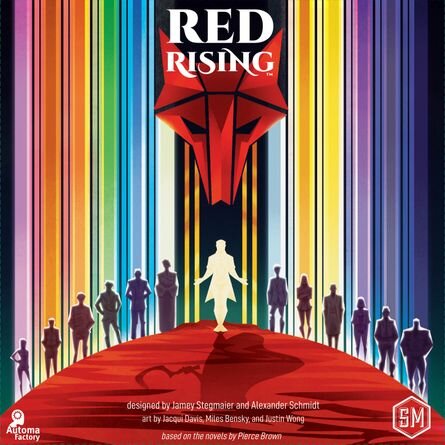 Originally posted at Punch Board Media